Christmas decorating is about memory making. If you are a parent or a grandparent, you want to make Christmas special for the kids. If you are a young person, you may feel the holiday season hasn’t begun until Mom or Dad hauls out the boxes out of the attic or basement.

No matter what your age, you treasure the memories of your childhood when it comes to Christmas.

The National Christmas Center in Paradise, Pennsylvania, has recreated a Woolworth’s store from the 1950s, and owner Jim Morrison said in a recent interview that he enjoys overhearing families discussing the items on display there. “It takes people back to their childhoods,” Jim explains, describing how grandparents visiting the museum often whisper to their grandchildren, “That was my train set, or we had that on our tree.”

Let’s take a look at some of the more popular vintage decorations. 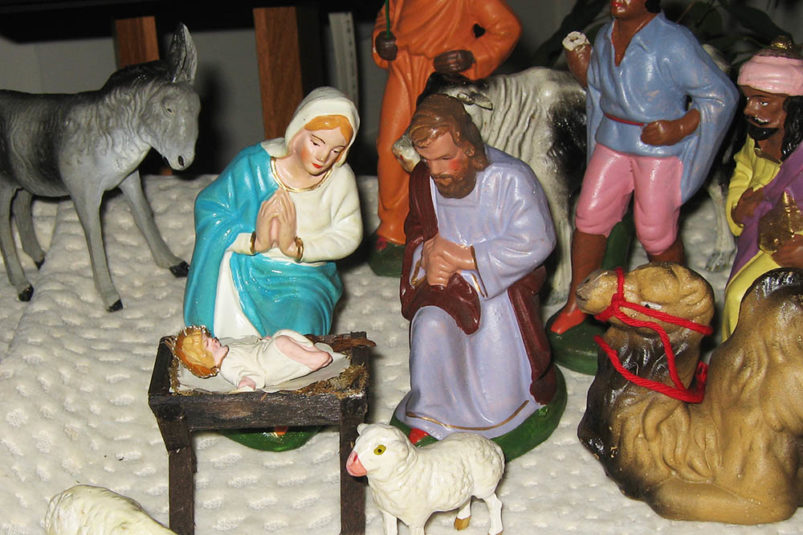 Plastic began finding its way into everything in post-World War II America, and Christmas decorations were no exception. Dime stores such as Woolworth’s and chain department stores such as Sears and Montgomery Ward began selling inexpensive plastic nativity sets with figures of the Holy Family, animals, angels, shepherds and the Three Wise Men.

Over time, these plastic sets replaced those made of chalkware (sculpted gypsum) that were introduced in the 1930s. Baby boomers also recall inexpensive one-piece molded plastic nativity sets from their childhoods. These sets now fetch good prices on internet auction sites like eBay.

Some of the favorite “toy” nativity sets for children over recent decades have been the Fisher-Price Little People nativities and the Peanuts nativities.

Whether you are a Baby Boomer or a Millennial, your neighborhood probably was filled with holiday blow mold decorations at Christmas time. Maybe your lawn just had Santa and his sleigh or maybe your neighbor’s yard was filled with dozens of figures representing everything from Frosty the Snowman to the Holy Family.

Although they were invented during the Depression, blow mold sets – large colorful three-dimensional plastic figures with hollowed out centers – began a popular reign in the 1960s. In addition to enduring representations of Christmas such as the Nativity or Santa Claus, cartoon characters dressed for the holidays have always been blow mold favorites. Snoopy, Winnie the Pooh, and Garfield may be part of your family’s memories, for instance. The decorations you hang on the tree are another big part of Christmas nostalgia. Many Baby Boomers grew up with “Shiny Brite” ornaments and continue to showcase them on their trees each year.

“Shiny Brite” was the trade name for a colorful glass ornaments that came in many shapes and sizes, However, their popularity has caused people to use “Shiny Brite” for the style of ornaments made by imitators as well.

Who can forget comedian Chevy Chase as Clark Griswold in National Lampoon’s Christmas Vacation as he attempts to power up thousands of outdoor Christmas lights at his suburban home? For most Americans, Christmas would not be Christmas without lights.

Those large multi-colored ceramic bulbs that were everywhere in the mid-20th century today create nostalgia on trees and as part of outdoor displays. Do some of your old Edison-style bulbs not work? No problem. Pinterest is filled with ideas for holiday craft projects that make use of those colorful bulbs.

In 1973, Hallmark launched its Keepsake line with six glass ball ornaments and 12 yarn figures. Today, some 8,000 ornaments and 100 different series later, Keepsakes are part of many happy holiday memories.

Many Baby Boomers have Keepsake ornaments marking their weddings and the birth of their children. Collectors enjoy decorating their trees with Hallmark Keepsake angels, teddy bears and trains and even their pop culture favorites such as figures from Star Wars and Peanuts. 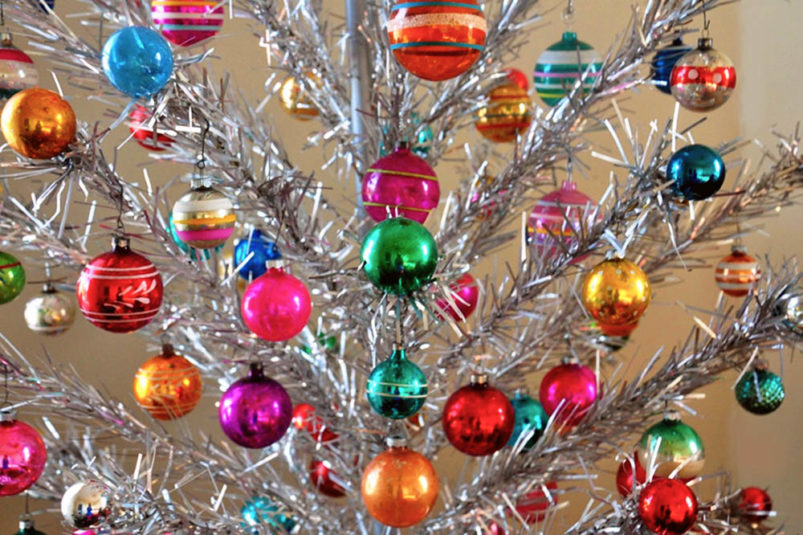 Depending on where in the Baby Boom age spectrum you fall, you consider the metal trees of the late 1950s and early 1960s either nostalgic or commercial.

Tinsel icicles, aluminum trees and color wheels were all the rage as technology learned during World War II was put into use for the home – until “A Charlie Brown’s Christmas” aired on TV in 1965 and every Christmas thereafter, that is.

Charles Schultz’s script had Charlie Brown bemoaning the modern commercialization of Christmas, and he targeted shiny metallic trees as prime examples. The popular animated Christmas special influenced the public, and sales of the non-realistic trees plummeted.

Today, however, metal trees are considered “retro” and are making a comeback. Just remember, electric lights on metal trees can be hazardous. If you want more light, use a color wheel instead.

Are today’s young families embracing their parents’ holiday decorating ideas or creating their own? The answer is, a little of both. Millennials enjoy bringing their children to Grandma and Grandpa’s house to experience the same lights and decorations that they had as children.

However, since many young adults want to maintain a minimalist lifestyle, they do not envy the boxes of holiday stuff their parents store away each January.

Suni Petersen, a clinical psychology professor at Sacramento’s Alliant International University, told The Washington Post in a 2015 interview that both millennials and boomers are at a stage in which they are evaluating and/or reevaluating  the worth of their possessions.

“The boomers are saying, ‘I don’t want to deal with all that stuff. I only want to deal with what’s important,’” says Peterson. “The millennials are a combination of wanting the traditions and nostalgia of their childhood. But at the same time, they are a generation putting more meaning into life. This may be the bridge that can come between the two generations.”